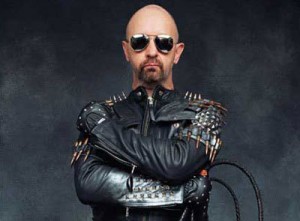 Judas Priest frontman Rob Halford recently spoke with Loudwire.com about the now-defunct Parents Music Resource Center (PMRC). Halford also talked about the high-profile lawsuit in 1990 that charged his band of hiding subliminal messages, causing the 1985 suicide of one fan and attempted suicide (and eventual death) of another. “It was a peculiar time, wasn't it?,” mused Halford. “Priest, Ozzy, W.A.S.P. -- that was just a very unfortunate time for music in general. It's always been there in rock 'n' roll; it's like when Elvis shook his hips and they tried to ban him being filmed from the waist down.

He added, “I think the world has grown up and probably realized that we've got way more important things to worry about like giving people a job. But it wouldn't surprise me if it happened again at some point. People mistakenly abuse what we do for their own agenda. The whole PMRC was a politically-based idea. Do they still put those [parental advisory] stickers on records? I think there's some value to that. I'm totally against censorship, but I think if you take your kid to the movies you want to go, ‘I need to know is that an R-rated movie or a PG-movie or is it a kid’s movie?’ You do need some guidance. I'm all for guidance but not for censorship.”
Posted by Live Wire at 7:45 AM